I have been asked several times over the years why I believe the teachings of Christianity but reject the beliefs of the other religions of the world.  In our politically correct society we are constantly told that each religion is valid, each will get its followers to God (or whatever they call God), and no one can judge another's religion.  Well, I completely disagree.  They can't all be right.  In fact, they are NOT all correct.  Christianity is the only true religion and the only way to God.

So why do I believe this?  There are many reasons but I will only list a few in no particular order.

1.  The resurrection of its founder and leader.

Jesus Christ is the only founder and leader of a great world religion who is no longer in the tomb!  God has raised Him from the dead following His crucifixion partly to attest to God's acceptance of Christ's work on the cross.  When the founder and leader of a religion has come back to life then its time to sit up and take notice!  Not all religions ARE the same after all!

(1)  The history recorded by contemporaries of the 1st century apostles confirm the existence of a great prophet/teacher named Jesus of Nazareth.  Furtermore, they confirm he was executed by the Romans.  To deny the historical existence of Jesus is foolish in the light of the evidence.

(2)  If the teachings and historical events of Jesus (such as the resurrection) were untrue, it is highly unlikely that most of the closest followers of Jesus in the 1st century would give their lives for such falsehoods.

(3)  If you view Jesus as a great teacher or moral leader then you must answer the question:  What do I do with Jesus' own claims?  He claimed He would die for sin.  He claimed He would rise from the dead.  He even claimed, "No man can come to the Father but through Me."  The famous argument used by many concludes Jesus must either be a Legend (not possible given the historical evidence), Liar (some moral leader!), a Lunatic (some great teacher!), or exactly who He claimed to be:  LORD.

(4)  His resurrection attests to the truth that Jesus is Lord.

2.  I also believe Christianity to be the only true religion because of the profound impact on the entire world for good it has had when truly practiced as Christ taught.

Yes, Christians still commit evil, sinful acts on occasion.  However, no religion has had such a positive impact on the world as Christianity.  Seriously, does Islam impact the world for good (treatment of women, killing non-Muslims, etc.)?

3.  I have seen the lives of many individuals who have been changed by Christ.

The influence of Jesus and His teachings on the lives of many people have resulted in completely changed lives.  Individuals have been converted from a life of wickedness to a life of good.  Personally, I have witnessed such changes in others over my lifetime.  Furthermore, the changes which do occur in these individuals align with the very teachings of Jesus from the Scriptures.

4.  I know how Jesus changed my own life.

I believe in Jesus because of the Word of God.  Scripture gives me an objective basis for my faith.  The word tells me if I confess with my mouth Jesus is Lord and believe in my heart that God raised him from the dead, I will be saved.  I believed it and still do.

But I also believe in Jesus because of the subjective changes I have experienced in my own life as a result of repenting of my sin and trusting Christ.  I obeyed objectively the written Word of God and was subjectively changed by the Living Word of God, Jesus!  My nature, character, and life changed just before my 23rd birthday.  Things I never cared about (e.g., prayer, reading the Bible, going to church) became central to my life almost immediately.  Sinful acts I once engaged in at least weekly (some daily) I no longer practiced.  This wasn't my will power, no way!  Jesus Christ transformed me and is still transforming me today.

So those are some of the reasons I am a believer in Jesus.  Jesus claims to be the only way for a man to get right with God.  He was raised from the dead.  Others have been radically transformed by believing in Him.  I, too, have personally experienced this transformation.

If you have not you may.  The Word of God calls on us to repent (turn from) our sin.  And, as we turn from our sin, the Bible calls on us to trust (turn to) Christ.  Put your faith in Him.  Trust Him with the keeping of your soul and its ultimate delivery to God.
Posted by TheSaxonHus at 5:23 PM 1 comment: 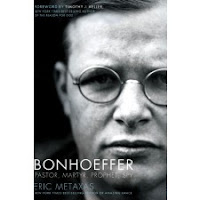 Eric Metaxas has penned a magnificent biography of a brilliant 20th century man of God who was executed for his opposition to Hitler's Third Reich.  I read the very long book (almost 600 pages) in a matter of days, much of that reading accomplished during my vacation.  The book is so good I found it very hard to put down especially when I reached the accounts of Bonhoeffer at the beginning of the 1930s.

Prior to reading this work I was familiar with the life of this man.  I had briefly studied him in college and have read a couple of his works (including "The Cost of Discipleship").  But Metaxas' book brings out many aspects of Bonhoeffer's life which had previously eluded me as well as some of his reasoning in the decisions that he made.   I strongly recommend this book to everyone!

There were several portions of the book which I underlined and marked but here are a few samples:

1.  Bonhoeffer writing about part of his visit to America in 1930.  Observe his wisdom and foresight:

"The theological atmosphere of the Union Theological Seminary is accelerating the process of the secularization of Christianity in America.  Its criticism is directed essentially against the fundamentalists and to a certain extent also against the radical humanists in Chicago; it is healthy and necessary.  But there is no sound basis on which one can rebuild after demolition.  It is carried away with the general collapse.  A seminary in which it can come about that a large number of students laugh out loud in a public lecture at the quoting of a passage from Luther's De servo arbitrio on sin and forgiveness because it seems to them to be comic has evidently completely forgotten what Christian theology by its very nature stands for." (p. 105)

2.  Near the end of 1942, shortly before his arrest, Bonhoeffer wrote an essay which is an assessment of all he and his associates had experienced over the ten years of Hitler's reign.  Again, note his reasoning:

"One may ask whether there have ever before in human history been people with so little ground under their feet--people to whom every available alternative seemed equally intolerable, repugnant, and futile, who looked beyond all these existing alternatives for the source of their strength so entirely in the past or in the future, and who yet, without being dreamers, were able to await the success of their cause so quietly and confidently. ...

"The great masquerade of evil has played havoc with all our ethical concepts.  For evil to appear disguised as light, charity, historical necessity, or social justice is quite bewildering to anyone brought up on our traditional ethical concepts, while for the Christian who bases his life on the Bible it merely confirms the fundamental wickedness of evil. ...

"Who stands fast?  Only the man whose final standard is not his reason, his principles, his conscience, his freedom, or his virtue, but who is ready to sacrifice all this when he is called to obedient and responsible action in faith and in exclusive allegiance to God--the responsible man, who tries to make his whole life an answer to the question and call of God."  (pp. 445-446)

3.  Although he never married, Bonhoeffer, as a pastor, did perform marriages and understood well the nature of marriage.  Consider this simple yet profound statement:

4.  Bonhoeffer was working on a book on Ethics when he was executed.

"Those who wish even to focus on the problem of a Christian ethic are faced with an outrageous demand--from the outset they must give up, as inappropriate to this topic, the very two questions that led them to deal with the ethical problem:  'How can I be good?' and 'How can I do something good?'  Instead they must ask the wholly other completely different question:  'What is the will of God?'" (p. 468)

5.  Lastly, here is his famous quote on the matter of abortion:

"Destruction of the embryo in the mother's womb is a violation of the right to live which God has bestowed upon this nascent life.  To raise the question whether we are here concerned already with a human being or not is merely to confuse the issue.  The simple fact is that God certainly intended to create a human being and that this nascent human being has been deliberately deprived of his life.  And that is nothing but murder."  (p. 472)

Outstanding book and well worth the time to read!


Posted by TheSaxonHus at 3:37 PM No comments:

"My conscience is captive to the word of God."

TheSaxonHus
This "Saxon Hus" is a Reformed Baptist who serves as an adjunct professor at Missouri Baptist University, Maryville University, and St. Charles Community College.

Some of My Favorite Blogs

Some of My Favorite Links

Some of My Favorite School Links

Some Followers of this Blog